Pipe fabrication at JBH has expanded from commercial construction to high-tech cleanroom innovations and now to providing mechanical integration support to The Boeing Company. On June 8, 2009 Boeing presented a plaque to JBH that read; “In recognition and appreciation for your dedicated performance and service on the Advanced Tactical Laser Project.” On June 13, 2009, Boeing and the U.S. Air Force successfully fired a sharp-shooting laser from the Advanced Tactical Laser (ATL) Aircraft while it flew over White Sands Missile Range in Alamogordo, New Mexico. Boeing describes the ATL Aircraft as a C-130H aircraft equipped with a chemical laser, a beam control system, sensors and weapon-system consoles. According to Gary Fitzmire, VP and Program Director of Boeing Directed Energy Systems ATL’s ultra-precision engagement capability will dramatically reduce collateral damage when hitting a target. Making this possible is a complex mechanical system facilitating the lasers release. JBH has provided mechanical integration support to this system since 2005 through fabrication, installation and testing of the complex piping assemblies. The JBH team also provided design feasibility checks to Boeing engineers ensuring that the new systems could realistically be built. Once designed, the specifications for the piping system were given to JBH to construct. The fabrication, assembly and installation of pipes ranging from 1/8” to 6” was performed at our on-site Pipe Fab Shop or installed directly onto the aircraft housed at Kirtland Air Force Base. Exclusive weld procedures were developed by our fab shop to meet the strict needs of the chemical laser support system. 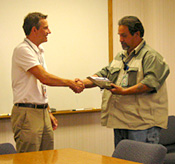 Quality needs were significant because of chemical toxicity; each weld went through rigorous tests to prove its integrity. Weld procedures for the systems installation met classes A, B, and C of Aircraft Welding Spec D17.1. Orbital, Tig and Stick welding was performed on Stainless Steel, Monel and Hastelloy pipes by specially certified JBH pipefitters. Welds were tested based on the required class with Class A being held to the highest quality requirements. Class A welds were X-Rayed to identify gaps and non-conformance with specs. Class B and C welds were tested either pneumatically or hydrostatically using air-pressures up to 9,000 psi. Every weld was certified by a 3rd party before being integrated into the system. The complex piping design, developed by Boeing’s highly skilled engineers, was brought to life by an educated and experienced JBH team of welders, pipefitters and sheet metal workers.