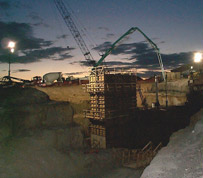 The Isotope Production Facility (IPF) is an extension to the existing linear accelerator at Los Alamos National Laboratory. The extension, 40 feet below grade, had four significant issues to be addressed; 1) Vibration from conventional excavation could disrupt beam alignment and shut down the accelerator, 2) Significant excavation next to the existing building could undermine the foundation, causing settling that could affect operations, 3) Conventional excavation would expose construction workers and lab personnel to potential radiation hazards, 4) the two 13.2 kV ductbanks powering the accelerator could not be taken out of service. The facility was constructed using a system of drilled shafts. 42” in diameter and 65 feet deep that could be installed during brief 2-4 day accelerator outages and accelerometers and alignment points were installed to measure vibration and settling inside the beam tunnel. The results were impressive.

The installation of the drilled shafts was completed quickly and had no operational impact on accelerator alignment. The existing foundation showed no evidence of settling.

Using the drilled shafts did not require the removal of significant quantities of soil that provided radiation shielding, eliminating the risk to lab and contractor personnel. The major excavation was completed during a complete shutdown of the accelerator and had little impact on accelerator operations.

The drilled shafts were used to support a steel structure that was designed to have the ductbanks span the excavation during construction. 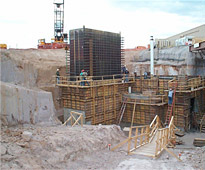