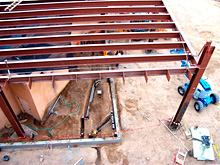 This project involved the demolition and modification to portions of building 256 on the University campus, as well as encasement of the existing telecommunications room. The sensitivity of the telecommunication equipment required crews to constantly monitor dust and dirt content while installing new HVAC and electrical systems. In addition the heating and cooling systems had to be running continuously to maintain a consistent temperature for the equipment. To minimize dirt settle, JBH set up a positive pressure flow process mimicking that of a cleanroom to ensure that dust and dirt were not allowed to sit on the equipment for any length of time. Temporary fans were used to keep pressure flowing outward pushing particles from the room. To further protect equipment a cleaning regime was developed and crews wore booties to limit the amount of grime around equipment. To maintain consistent temperature throughout the changeover, crews mounted the new duct work on top of the existing building side by side with the old system. Once completely installed, the new system was turned on using the old system as a backup. This left the equipment risk free of a drop in temperature. Once crews were confident in the cooling capacity of the new HVAC System, the old system was removed. Every detail of the changeover was scheduled daily to avoid any disruption in cooling temperature and positive air-flow in the building. JBH also constructed a new retaining wall from the southwest corner of the hospital parking garage north for about 50 feet.