This project included the renovation of existing office warehouse space for New Mexico’s largest school district into a modern Data Center housing a comprehensive information technology infrastructure including associated upgrades to the mechanical, electrical and plumbing systems.  Claudio Vigil Architects designed the project, which included installation of a raised access floor, construction of a utility farm to contain mechanical support equipment, upgrades to the adjacent Research, Development and Accountability (RDA) facility, and installation of a new roofing system.

Superintendent Mark Del Vecchio led crews through 106 days of significant demolition to the facility including demo of existing walls, floors, and windows. The standout demolition task was the saw cut and removal of the concrete, revealing the existing dirt floor. During construction meetings, the project team agreed that the best way to excavate the site was to bring in mini excavators to do the job. The only thing that stood in the way was the doorframe!  After discussions between the construction project manager, architect, owner and superintendent, the team developed a solution, cutting barn doors into the existing structure. Plans called for a re-skin of the building, so the solution was accepted and the team moved forward by cutting a 15 ft. entry into the building and manufacturing a dirt ramp so the excavators could be driven straight into the facility. JBH carpenters built and attached wooden barn doors onto the building to allow for lock up at night during the 10-day excavation. 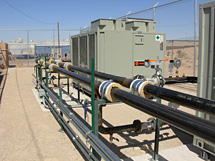 Construction on an occupied building with a heavily congested site – You need Golf Carts for What?!
Sharing your workspace with a large construction crew and their varied equipment doesn’t sound like much fun, but when you get a ride to your office in a golf cart, it’s not so bad. The data center renovation project was a far-reaching project that included creation of a raised access floor, construction of a utility farm to contain mechanical support equipment, upgrades to the adjacent Research, Development and Accountability (RDA) facility, and installation of a new roofing system. Many APS employees were displaced during construction and the team had to develop a plan to ensure their safety throughout the project. APS personnel and construction workers were directed to park their vehicles at Milne Stadium, the nearby football facility also owned by APS. JBH operators drove construction and owner personnel from the parking lot to the site on a designated safe route using 8-passenger golf carts. Carpenters built pedestrian safe zones and a crewmember was assigned to monitor gate access at all times to manage pedestrian and vehicular traffic flow both inside and outside of the building.

Function and Aesthetic Quality of Design – Claudio Vigil Architects
The intentional low-key façade contains the district’s data center with a raised floor computer equipment room, printer room, conditioned paper storage, loading dock, equipment staging area and offices on the ground floor totaling 12,000 s.f.  An additional 1,500 s.f. in the mezzanine houses the pumps for the new mechanical system and the electrical equipment for the back-up power for the data center.  The functional requirements for the facility were substantial both inside and outside. A secure mechanical yard on the property is a redundant synchronized system with expansion space for an additional 60-ton chiller and an additional generator, as the district’s technology requirement demands increase.

The finished project is both aesthetically pleasing and highly functional, providing APS IT and RDA employees a safe, professional work environment that supports efficiency throughout the district.